Federal Reserve Notes and the Golden Ratio of 1.618 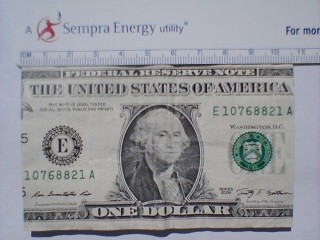 It is easy and legal to convert the appearance of Federal Reserve Notes in the manner described below.
Currently, Federal Reserve Notes exhibit an aesthetic proportion called "The Pell Ratio" (named after the mathematician, John Pell). If we take the length of any note and divide it by its width (or height), then the outcome is approximately 2.35 (2.348 = 15.5 cm ÷ 6.6 cm). This proportional ratio is very close to the ratio of 2.414, also known as one plus the square root of two (1 + √ 2 ).

The Golden Ratio, or golden mean, also known as the divine proportion, is exhibited in certain properties of aesthetic perception and action circumspect to planet Earth's biology. Humpbacked whales sing in a diatonic scale. Western style music, of which the diatonic scale is founded on, is based on the golden ratio whether it is a pure temperament or equal temperament scale. Pythagoras and modern-day students of music discover this correlation. But it gets better...

The atomic weight of a chloride ion (35.45) divided by the atomic weight of a sodium ion (22.9898) is 1.542. You may say that is not 1.618, but Mother Nature doesn't need to be precise when it comes to planetary aesthetic themes. The study of aesthetics, as far as Nature is concerned, is more inclined towards approximations and the infinite variety of variant approximations, and less inclined towards precision or speed of computation. It's as if She is saying, "Hey dude, enjoy the ride and sniff a few flowers along the way." These properties of easy-goingness and non-exactness is exhibited in the Lucas numbers. In the Lucas series, a slight flaw is interjected at the very beginning of the Fibonacci series, and then the remainder of the series is built up in a Fibonacci fashion. So, instead of starting out with zero followed by one and proceeding onwards from there as the Fibonacci sequence exhibits, (namely: 0 + 1 = 1, 1 + 1 = 2, 1 + 2 = 3, 2 + 3 = 5, 3 + 5 = 8, etc) the Lucas series starts out with the number two followed by the number one and builds on that. In other words: 2 + 1 = 3, 1 + 3 = 4, 3 + 4 = 7, 4 + 7 = 11, and so on.

Anyway, sodium chloride is the predominant salt within the bloodstream of all sentient creatures on this planet Earth and Earth's oceans. But if we look at other planets, just within our solar system, other salts are in evidence. On Venus, dipotassium phosphate is on its surface (K2HPO4). If Venus were to develop a biosphere inhabitable for life within the confines as we know it, then dipotassium phosphate would be available for biology to incorporate into its makeup as its dominant salt of choice and define its creature's sense for aesthetic proportion. By the way, the atomic weight of two ions of potassium plus one of hydrogen (the dipotassium/hydrogen of that salt, namely: K2H = (K2:39.098 x 2) + H:1.008 = 79.204) when divided into the atomic weight of an ion of phosphate (PO4 = P:30.974 + {O4:15.999 x 4} = 94.97), yields one-half of the Pell ratio (1.199 is one-half of 2.398). And since ratios can be reciprocals of one another and still be the same ratio, then it doesn't matter which way we interpret this deviation of the Pell ratio (as being either one-half of the Pell ratio, or twice the value of the reciprocal of the Pell ratio). This is because a ratio is the growth rate between any two values in a number series, or it can be an aesthetic proportion exhibited between any two measurements of an object, or it can be an aesthetic proportion exhibited between any two measurements of a sensory experience, and from the point of view of either value – one or the other. So if, eight divided by five yields 1.6, then its reciprocal relation of five divided by eight yields 0.625 – not precisely the same, but equivalent to one decimal digit to the right of the decimal point. This is good enough for an approximation generated by two adjacent numbers of the Fibonacci series towards the beginning of the series (namely: 0, 1, 1, 2, 3, 5, 8, 13, 21, 34, 55, 89, 144, 233, 377, 610, etc), as compared to further out in the series, namely: 144 ÷ 89 = 1.617. And when compared with its reciprocal relation of 89 ÷ 144 = 0.618, then this is accurate to two decimal digits. So conversely, 94.97 (the atomic weight of the phosphate ion) divided into 79.204 (the atomic weights of dipotassium and hydrogen ions) yields 0.834. 0.834 is twice the value of the reciprocal of 2.398, namely: one divided by 2.398 is 0.417. And 0.417 times two is 0.834.

For the purposes of this discussion, Maldek strikes my fancy. My hypothesis is this....

What if a small portion of the Earth's inhabitants hail from this planet and they comprise the civilized countries of this Earth and dominate this planet with many of their cultural idiosyncrasies which are foreign to this Earth? And what if they couldn't handle life on their own planet due to their own destructive tendencies which resulted in them destroying it a long time ago? And what if the consciousness of the Moon invited them to reincarnate there, but their destructive tendencies surfaced again resulting in their blowing off the Moon's atmosphere making it a dead planet to this day? And what if they then came to Earth during the third root race of Atlantis and were known as the "grey people" since the grey aliens living on the Moon at that time gave the reincarnated humans their grey bodies and the Moon was then a living biosphere? And what if the grey aliens still live on the Moon but they are sequestered within artificial biospheres? Pretty interesting possible historical narrative, don't you agree?

It is known that many Renaissance artists, including Leonardo da Vinci, used both the Pell and Golden ratios in their artwork. But this would make sense since they remember what is customarily aesthetically appealing to them. But I wonder......

What if it is improper to impose a ratio which is foreign to this planet, and foreign to all biology and aesthetic sensibilities among all of Earth's creatures?

My suggestion is a non-destructive one, namely: fold the two ends of each Federal Reserve Note over to its backside (and include a good sharp crease using the thumbnail against the side of the forefinger) in such a way that its length is reduced down to an appropriate length more closely approximating the proportions of a Golden Rectangle in which the length divided by the height is approximately 1.618.

It turns out that our job is very easy for the one and five dollar denominations. Here's my plan.... 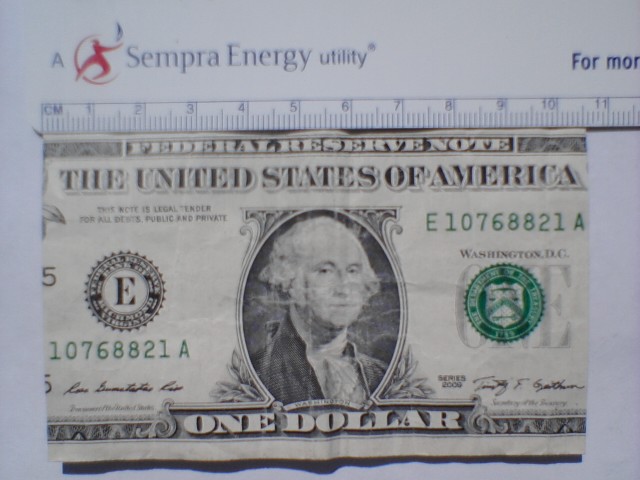 Take a one dollar note out of your pocket and fold it in the manner shown above. I asked a banker to explain their requirements to me.... It has to be at least one-half as long as the original, and both serial numbers have to be visible. But this was if I had cut off the two ends. This would have been another example of a destructive tendency carried over from Maldek, namely: cutting up stuff. We don't want to repeat the mistakes of our past, now, do we? Hardly.... So, fold – don't mutilate – the two ends over towards the backside at these two points. But if you must destroy a little, then make one or more tiny tears into the crease to help hold them in place! 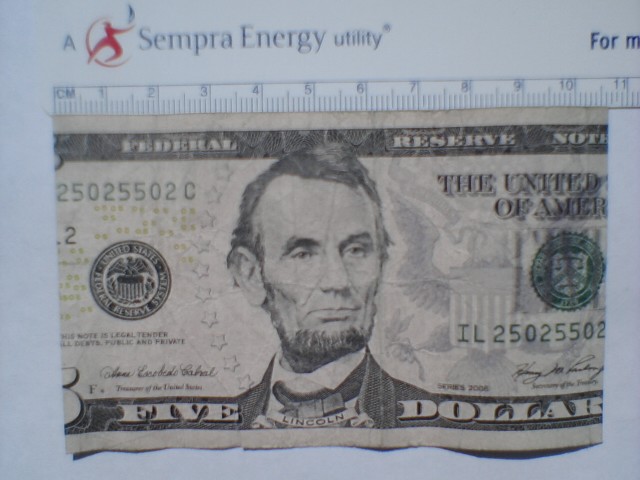 1. Fold the left-end immediately after the first two alpha-digits and immediately before the numeric-digits which follow after a space-break between these two sets of numbers within the left serial number. In this example pictured above, the fold would be within the space after the "IL" and before the "25025502 C".

2. Fold the right-end immediately before the last alpha-digit at the end of the right set of serial numbers. In this example, this fold would be within the space-break immediately after the "IL 25025502" and before the capital letter "C".

So to repeat myself, these two denominations of one and five dollar bills are in the length of 15.5 cm (cm = centimeters). Their height is 6.6 cm. 15.5 cm divided by 6.6 cm is a ratio of approximately 2.348. So, we shorten down the length to around 10.7 cm (since 6.6 cm times 1.618 is 10.6788 cm). In these two photos above, it looks like the one dollar bill acquired a new length (when folded) of almost 10.6 cm; while the five dollar bill became slightly over 10.6 (the bill bent upwards slightly towards the camera, thus giving the appearance that it is slightly shorter than it really is).

See how easy this is!